Good morning, space fans! If you're patiently awaiting the Space Shuttle Endeavour's arrival in San Francisco around 9:30 a.m. you can watch her prepare for takeoff on the back of her Boeing 747 down at Edwards Air Force Base right here:

Update: Endeavour took off around 8:20 a.m. and is more or less on schedule at this point. Expect her around the Bay Area between 9:30 and 10 a.m. this morning. If you missed the takeouff, here's a parting shot from the livestream down at Edwards. We promise to geek out with even more photos as we get them:

Update 8:40 a.m.: ABC7 Los Angeles is reporting a different flight path from the one we had confirmed yesterday. The new route below will still take Endeavour around the Golden Gate Bridge and for a lap over San Francisco, but now follows Interstate 280 South on the west side of the city to get down to Mountain View. (Avoiding traffic on the 101, we guess?) This is the third flight path we've seen and we can't confirm its accuracy at this point, so take it with a grain of space-salt: 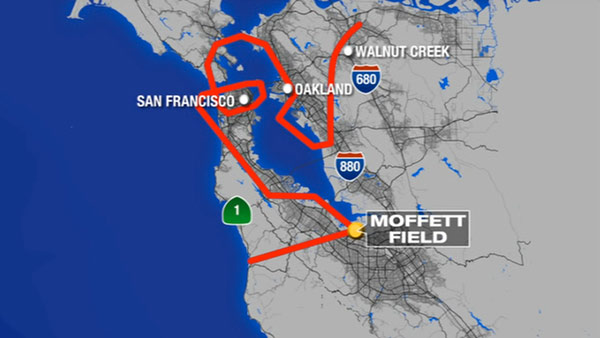 Update 9:45 a.m. Judging by the livestream and a CBS affiliate in Scramento the carrier and shuttle have just flown over Sacramento. Should be coming through San Francisco shortly. As Chronicle reporter Peter Hartlaub points out, it's pretty funny NASA doesn't track this thing like NORAD does with Santa Claus:

So the government is dodgy on #SpotTheShuttle path/times for security reasons, but they give our enemies exact location of Santa every year?

Update 10 a.m.: Still hard to tell where the big bird actually is (some of the footage on the livestream appears to be replays), but crowds lined up all along Crissy Field and the Embarcadero to catch a glimpse haven't reported any local sightings yet.

Update 10:15 a.m. Disappointing for the livestream viewers, NASA cut back to archive footage from Cape Canaveral right as folks are spotting the shuttle over Oakland. (KTVU also has a livestream right over here.) But here's our first shot of Endeavour over the Golden Gate Bridge viewing area: 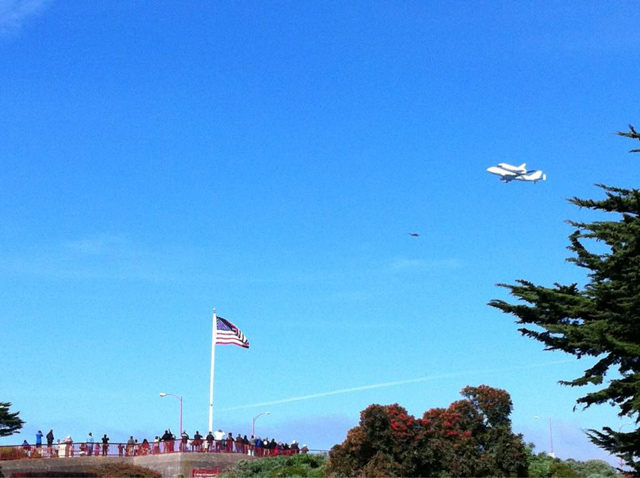 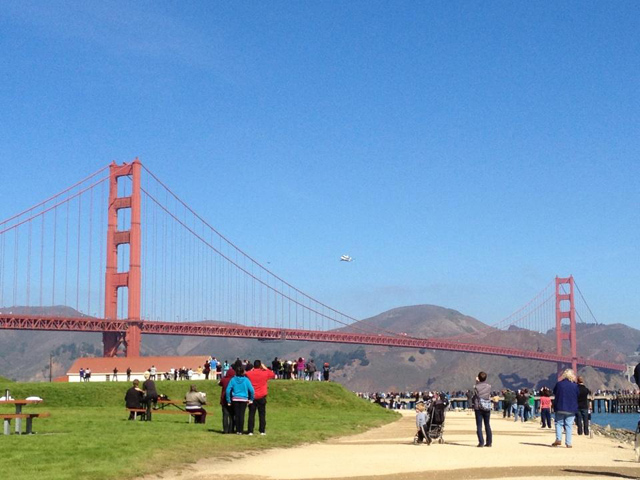 Update 10:40 a.m. Endeavour just made a low-altitude pass over Moffett Field. It looks like she'll do one more pass over Mountain View before heading south to fly over Monterey and then back down to Southern California.

Photos from this morning's flyover can be found right this way.

In addition to Space Shuttle Day and iPhone 5 Day, it's also PARK(ing) Day around the country. Get outside and enjoy some parklets. [Streetsblog] Fleet Week, Hardly Strictly Bluegrass and the next