A fire at the Chevron refinery in Richmond, Calif. has prompted shelter-in-place for Richmond, N. Richmond, and San Pablo. No word yet as to what caused the fire. ABC 7 News has live footage of the blaze in progress.

The fire has sent plumes of dark smoke into the air. BART is shut down at the Richmond station. We'll continue to update throughout the night. ABC 7 goes on to say that "a series of explosions...around 5 to 7" prefaced the fire, which was reported at around 6:40.

Update: 7:05: BART service has stopped between Richmond and El Cerrito del Norte. Crews are on the scene trying to put the fire out.

Below, scene of the fire at the refinery from ABC 7:

7:10: Shelter-in-place means that folks should stay indoors, close widows, etcetera. Fire i is located in the main processing unit where gasoline and jet fuel are produced.

Yet another view of the fire in progress: 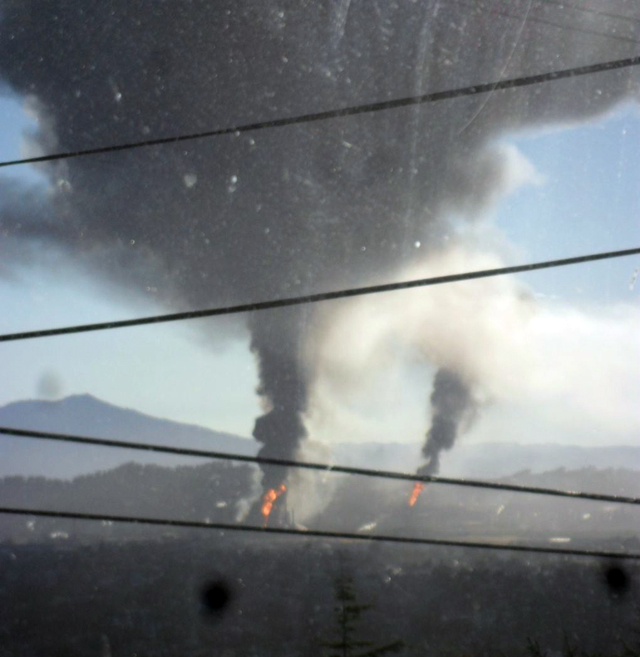 7:20: MSM has reported that the Chevron's refinery is now at level 3 HazMat order. One of the fires, however, is now out. We're also hearing that Chevron is currently not commenting on potential cause of the toxic inferno.

One local notes that it "looks like a forest fire going on" outside. Nate Seltenrich snapped the following shot, ominously noting, "That's not fog. It's black smoke from a fire at a chevron refinery in Richmond. Shot taken in [North Oakland]; be safe." 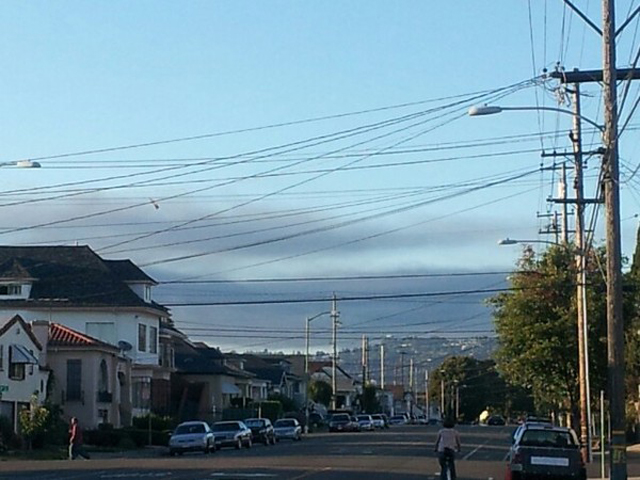 7:35: Sirens will go off every 30 minutes until shelter-in-place has cleared. "Everyone is accounted for at the refinery. No injuries have been reported," reports ABC 7.

7:45: Level 3 HazMat situation is the highest level. Residents are urged to place towels and blankets under their doors. On the lighter side, the fire is slightly diminishing. Winds, however, are moving eastward toward more populated areas.

7:50: To black smoke blanket looks horrifying. Sorry, but that is terrible. Though the (toxic) smoke isn't coming out as fast and violent, it's covering the area. And, for lack of a better cliche, it looks disgusting: 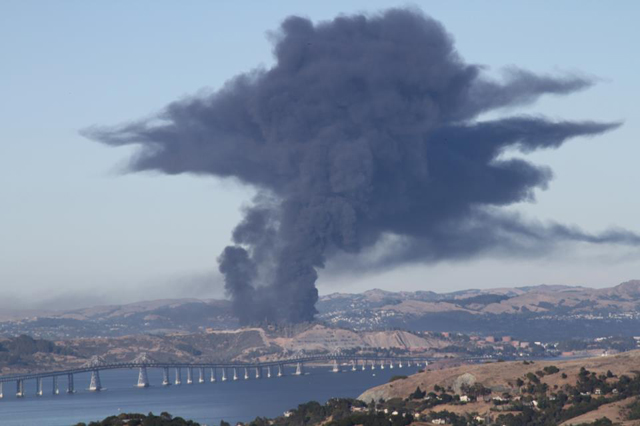 7:55: No estimated time regarding full or partial fire extinguish. Bay Area Quality management reiterates what's been said before, telling people to stay inside until shelter-in-place lifts.

Chevron says the fire started at 6:15, but the company does not confirm any explosions. 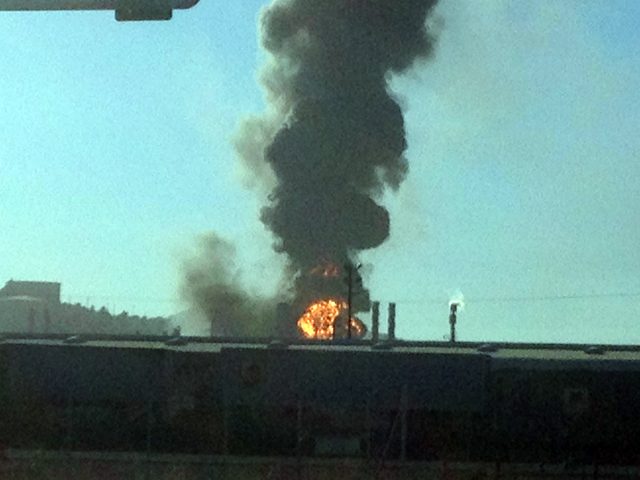 8:15: At the risk of besmirching ABC (because the team at ABC 7/KSO has been doing a superb job covering the Chevron fire), SFist sports writer Daisy Barringer notes:

...could be worse. FOX cut away for Hell's Kitchen.

8:35: In air-quality news, area residents are noticing a "bad smell" coming from outside. Oakland police are advising residents in North Oakland to take shelter as the plume of black smoke is heading their way.

8:40: The last time the Chevron refinery in Richmond played host to a fire was in 2007.

8:45: Fire still roars without restraint. Photo below grabbed at 8:40 from KRON 4 News: 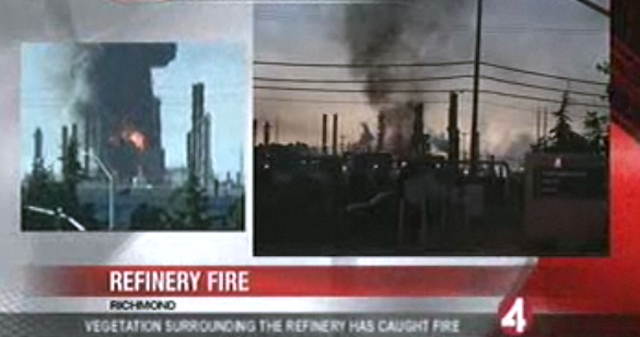 8:45: BART is now saying that El Cerrito, Richmond, Del Norte, and North Berkeley are CLOSED. [All stations except for Richmond are now open, says BART officials. -- SFist] Also, no bus bridge has been set up as the air is too dangerous.

9:00: Night clamps down on Richmond. Fire still going strong. Once again, shelter-in-place is in effect for thousands of residents. The air is toxic. Chevron officials might hold a press conference within 30 minutes.

9:05: According to Chevron official Nigel Hearne, "a leak caused the fire." No word yet as to how many gallons of diesel fuel have been burning. Firefighters are using nitrogen and steam to combat the fire.

9:10: According to an air official, the air is at "non detect"; however, four units from HazMat are in place at the scene. 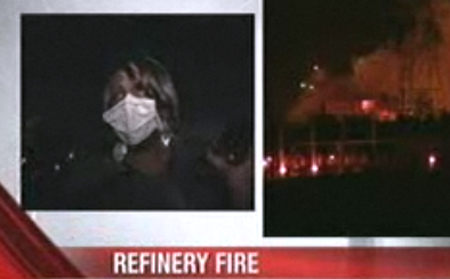 9:35: Chevron spokesman Nigel Hearne says that Chevron "wants to apologize to the community for the fire." the fire began at 6:15 pm. No details have emerged about what, exactly, started the blaze. Chevron says that they will take measures to protect area residents.

9:45: The only BART station still closed is the Richmond station, says BART officials. All other aforementioned stations are now open. Also, shelter-in-place not extended to El Cerrito.

9:55: Chevron still apologizing for diesel fuel leak and fire; however, they have no target time for fire containment. Also, Chevron maintains there were no explosions; residents talking to MSM outlets claim otherwise.

10:05: No tolls on the Richmond-San Rafael Bridge bridge tonight. Sirens still going off every half hour in Richmond, North Richmond, and San Pablo where shelter-in-place warnings are still in effect. Fire still going.

10:15: Oh hey, here's the last update @Chevron posted on Twitter over an hour ago:

More info on shelter in place in Richmond, Calif: cchealth.org. We will continue to provide updates as information becomes available

Chevron will host a town hall meeting at 6pm tomorrow. Location TBA. The company's full statement on this evening's refinery fire in Richmond:

"A fire started at our 4 Crude Unit at 6:15 pm today. At this time we do not have details about the cause of the incident. All employees have been safely accounted for. One employee has a minor injury and is receiving first aid treatment.

"We have comprehensive plans and procedures in place to respond to situations like the one we are facing. We are working with all appropriate local authorities.

"We will take all measures necessary to provide for the safety and security of our facilities and the surrounding community.

"We are responding to this incident as quickly as we can and are deploying highly trained personnel to assess and manage the situation.

"We will not speculate on the cause of this incident. Our priority right now is containing the fire and protecting the health and safety of our employees and community."

11:15: Second verse, same as the first: Shelter-in-place is still in effect for Richmond, North Richmond, and San Pablo. A health advisory has been issued for El Cerrito. People going to local hospitals complaining of trouble breathing. Fire still going strong, but "contained" according to Chevron.

Below, a photo from earlier this evening in nearby El Cerrito:

11:20: Official shelter-in-place lifted five hours since fire started. However, Chevron officials recommend that those living from Richmond to Oakland stay indoors for the night.

A massive (though not this massive) blaze on the 1500 block of Ocean Avenue snarled traffic in the Ingleside District Tuesday morning. Firefighters responded to a call at around 5:50 a.m.

Let the scalping begin! For the first time in its five years, Outside Lands has completely sold out of all ticket options, including all single-day tickets, as of this morning. In previous years,