Much like San Francisco, Auckland, New Zealand is a stunning city by the bay with mouthwatering culinary options in and around it. But when you take advantage of one of Air New Zealand's daily non-stop flights from SFO to Auckland, you'll definitely want to try other activities unique to New Zealand like black water rafting (rafting in caves) and hiking around "Mount Doom." 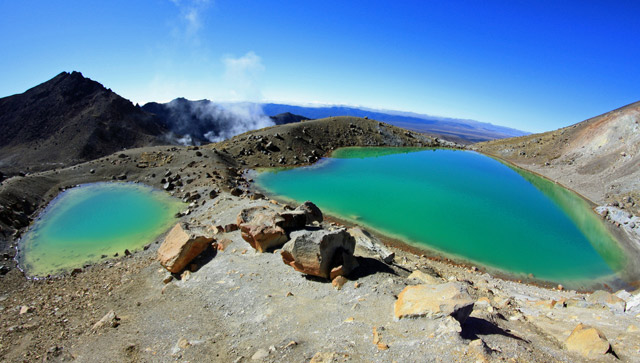 A two-and-a-half hour drive north of Auckland will take you to Waitomo. The area, below sea level 30 million years ago, now features spectacular limestone formations and cave systems. Inside these caves are glowworms (Arachnocampa luminosa), creatures unique to New Zealand who drop sticky, bio-luminescent threads to trap prey. 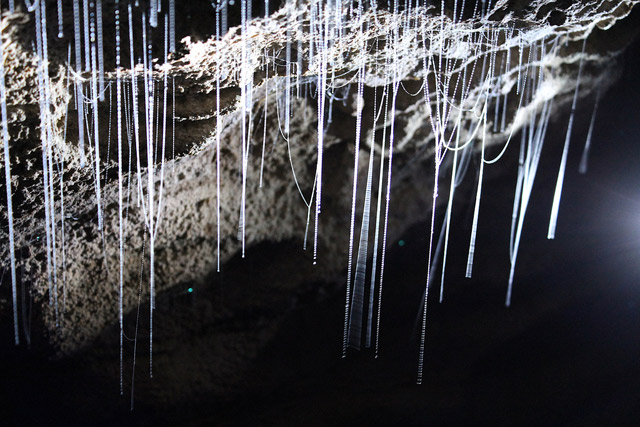 Visitors can explore the caves by black water rafting through them—there are various packages, including one where you can rappel down the cave and then go tubing under the glowworms! There are also boat tours of the magical-seeming caverns.

One of the most well-known landmarks in New Zealand is "Mount Doom" from The Lord of the Rings movies. The real-life Mount Ngauruhoe, about a four-hour drive from Auckland, stood in for the Mordor volcano and it's still active today. There's a spectacular 12-mile hike, the Tongariro Alpine Crossing, which passes the Ngauruhoe, Tongariro and Ruapehu volcano peaks. 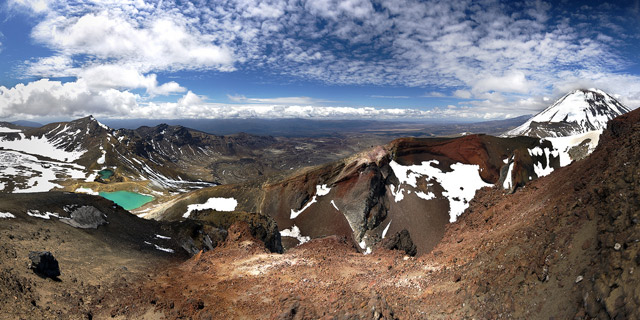 The challenging track takes between seven and nine hours to complete. You can also climb to the peaks of the volcanoes, but should build in extra time to do so.

Sitting in the North Island on the Pacific's Ring of Fire, the geothermal springs of Rotorua have been attracting visitors for hundreds of years. Geysers shoot out 65 feet into the air and people can enjoy hot spring spas and mud pools in the town, which is about three hours by car from Auckland. For a special experience, at some spas you can book a private pool for about $20 per half hour. 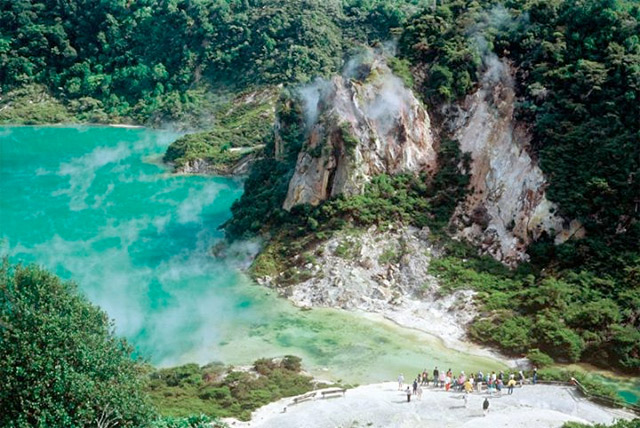 Rotorua has a rich Maori culture—the Te Pula, the New Zealand Maori Arts and Crafts Institute, is located there and there are Maori villages as well. It also boasts premiere mountain biking trails through lush ferns amidst redwoods, eucalyptus and many more towering trees.

A two-hour ferry ride away from Auckland is Coromandel, a popular vacation destination with untouched beaches, rainforest and a marine reserve. 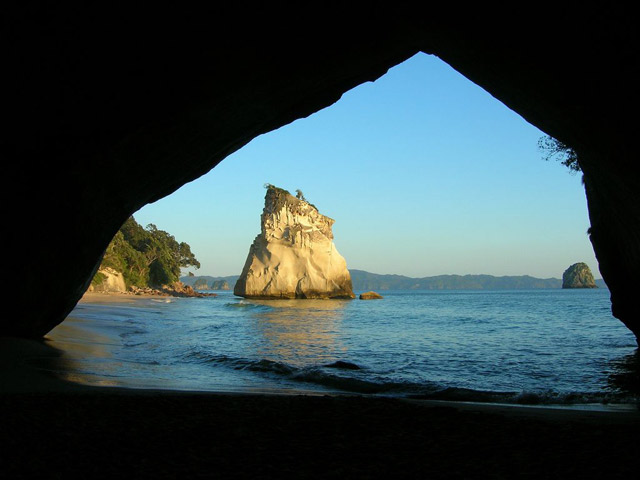 Photograph of Cathedral Cove by brewbooks

There are paths for scenic hiking and biking, but the most eye-opening part might be Cathedral Cove, a marine reserve accessible only on foot or by kayak. You can snorkel or scuba dive among rays, snapper and other sea creatures. 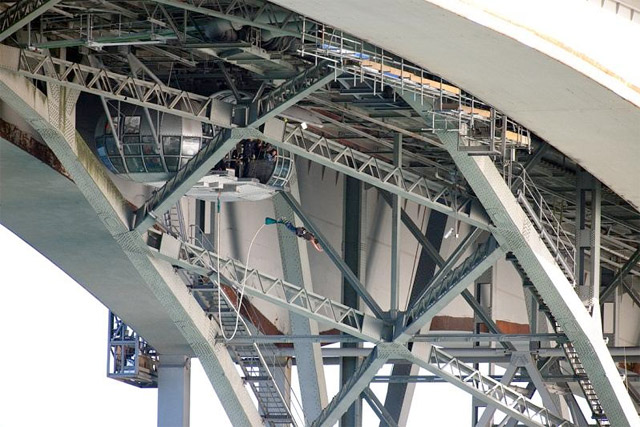 AJ Hackett offers the bridge jump. Back in 1987, AJ Hackett jumped off the bridge when it was illegal. Hackett, who was arrested and released after a few hours, and Henry van Asch had been experimenting with different bungy cords and jumps and eventually started the first bungy tourism business in 1988. You'll get to walk out onto the structure and see the Waitemata Harbour. Then you'll get suited up in the bungy pod, before you jump out and maybe even touch the water if you so choose.

Auckland itself is close to many terrific beaches for sunning, swimming and surfing. Right on the city's North Shore is Takapuna, and Mission Bay Beach is just 15 minutes by car. Orewa, 20 minutes to the north, is great for water sports and swimming while Karioitahi has a black sand beach, plus hangliding and paragliding. Also outside the city is Piha Beach, where you'll find another black sand beach with great surfing (and strong currents) and stunning views, thanks to its iconic Lion Rock. 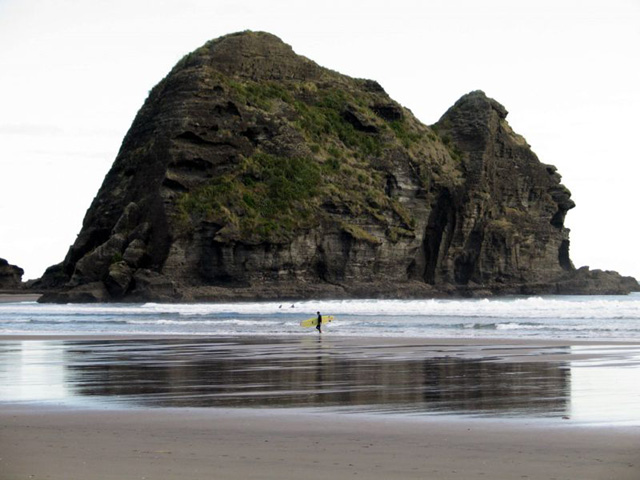 Photograph of surfer at Piha beach by soschilds on Flickr

A little further away from Auckland are Anchor Bay (an 80 minute drive), which is a nature sanctuary as well as beach. Take a 35-minute ferry to Oneroa and Little Oneroa on Waiheke Island for beaches and wineries.

The time is now to experience these natural wonders. Air New Zealand can take you to Auckland with daily flights from SFO. You can also test your Kiwi IQ to see if you can tell San Francisco from Auckland—don't forget to enter the sweepstakes for a chance to win two flights to Auckland!

Though his face is more and more recognizable in these our modern smartphone times, Michael Bauer remains one but a few anonymous restaurant critics left in the city. On Friday, August 4, Bauer

Starting today, two blocks of Stockton Street between Union Square and Market Street will be closed to make way for construction crews burrowing below street-level on the $1.6 billion Central Subway project.

—
Spectacular Beaches, Glowworms And Mount Doom: Head To Auckland For An Adventure
Share this