At 10 a.m. Tuesday, Mayor Ed Lee and the Golden State Warriors front office are scheduled to make good on months of rumors by officially announcing a deal to bring the NBA franchise back to San Francisco proper. According to the Chronicle, the deal will bring a $500 million, privately financed 17,000 - 19,000-seat arena to Pier 30 along the southern Embarcadero. The new arena is expected to be completed in time for the team to start hosting home games on the waterfront during the 2017 - 2018 season.

The team hasn't drawn up any blueprints for the arena yet, but they are confident they can rehab the aging pier to the point where it can support the scores of basketball fans. In exchange for fixing up the pier, the team gets a long-term lease on the 13 waterfront acres as well as a 2-acre parking lot across the Embarcadero. As part of the deal, the new stadium will need to include a "maritime element," which could include ferry or water taxi service directly to the arena.

Mayor Lee, who is still stinging a little bit after he failed to smooth things over enough to keep the Niners in town, is calling this his "legacy project." As he told fellow mustache owner Phil Matier, the Mayor is planning "to be on top of it personally."

The deal sounds like a win for city residents as well. According to the Mayor and team officials, the project won't require any money or new taxes from the city and will be 100% financed by the team's investment group. (Here's hoping they are still have plenty of cheap seats for the casual basketball fans.) The Port Commission and the Board of Supervisors have unofficially signed on by inviting the team to move to the city, but that's still no guarantee the project won't get tied up in the city's notoriously complain-y approvals system.

Anyhow, get ready for another rebirth in SOMA/Mission Bay. With the new Transbay Transit center expected to be completed around the same time in 2017 and the Giants bringing improvements the other side of McCovey Cove, the triangle between the Ferry Building/First & Mission/AT&T Park is going to start looking pretty shiny and new in the next five years or so.

Back on Pier 30, Mayor Lee and team officials are making the big announcement, which is streaming live on the Warriors site now.

Update 10:25 a.m: After opening their press conference with Train's "Hey Soul Sister" (which: no, that's not how you win over locals), Ahmad Rashad introduced Mayor Lee, who made a lame basketball joke before thanking all the city offices who helped seal the deal.

Team CEO Joe Lacob, whose management group bought the Warriors 18 months ago for the highest price ever paid for an NBA franchise was also in high spirits: The lease terms will put the team in control of Pier 30 for 50 years. Addressing the shunned city of Oakland, Lacob said the team was "very, very appreciative of our Oakland fans", but that their fan base was actually split "50/50 between the West Bay and the East Bay."

Team co-owner and Co-Executive Chair Peter Guber also spoke to San Francisco's tech pedigree and basically promised that there will always be smartphone service at the state of the art new venue he referred to as "a modern campfire."

Update 10:30 a.m: It's official! Red's Java House will be staying on Pier 30. According to CEO Rick Welts, the Warriors admire the legacy of the waterfront restaurant that was established in 1958 and they hope to keep that classic piece San Francisco alive. Lite Gov. Gavin Newsom also made a cameo to thank Rick, specifically for not tearing down Red's: 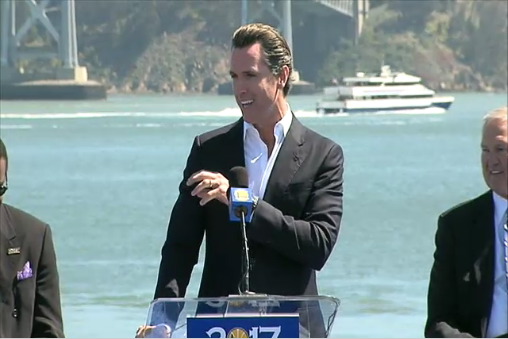 Update 11 a.m: While the press conference was heavy on the photo ops and celebrity appearances, it was pretty light on the details of the actual lease agreement between the city and the team. Expect more on this in the next few days.

The Dumbarton Bridge, a 1.6 mile span from Menlo Park to Fremont and carries an estimated 60,000 vehicles daily, will close during Memorial Day Weekend. The bridge will be closed from

Two months after 15-year-old Sierra LaMar disappeared from near her Morgan Hill home on her way to school, investigators have finally made in a break in the case. Last night they arrested 21-year-old