Walgreens. It's a great equalizer. We all need toothpaste (well, most of us), Advil, Band-aids, tampons, and deodorant (yes, you do), not to mention hastily selected non-porn birthday cards and toilet paper. Thus, your nearest Walgreens is likely to bring you into contact with everyone who lives within a five-block radius of you at one point or another. For some of us, like those who reside in the relatively calm and gentrified neighborhoods of Noe Valley and the Castro, a trip to Walgreens is a pleasant, deeply American experience. For others of us, it's a gauntlet of psychopaths several days off their meds and store clerks who would rather we were stabbed in the neck by the psychopath behind us than give us speedy service.

Also, since Walgreens has been enjoying plenty of bad PR and customer dissatisfaction of late due to this spat involving Blue Cross, we might as well add to their bad-PR pile. So, in the interest of being service-y today  or just making you feel bad about your neighborhood  we bring you our ranking of the five worst Walgreens in the city. 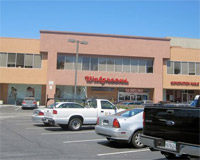 Sure, it's easy to knock the Bayview, but by all accounts this is an extra-shady Walgreens that should be avoided if at all possible. Per one Yelper: "I've seen people shoplift from here (successfully), there are always, always people asking for [money] inside the store and out, and this store removed the top tier from all the shelves so all the shadiness can be seen... And the security guard at the front of the store? I think he was hired to stare at my ass b/c that's all he can seem to do whenever I'm in the store." And according to another, the pharmacy's customer service leaves something to be desired ("It was super confusing because she just started yelling at me over the phone."). On the plus-side, there's always a dude in the parking lot selling $5 bootleg DVDs. 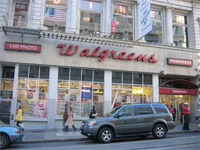 The only thing worse than dealing with a bunch of Tenderloin tweakers/crackheads/drunk and infirm is dealing with an assload of tourists and the odd aggressive panhandler wandering about. On the plus side, this place is open until midnight on weekdays, but we have never, we repeat never, been able to get out of this place quickly. There are invariably just one or two clerks at the checkout while a dozen people are waiting in line trying to buy cable-car mugs and foot cream, and don't even bother trying to hit one of those service buttons to get into one of the locked cases. NO ONE will help you. Employees will run the other direction when you signal to them. It's worse than the three other stores within a three-block radius, and there's always some pile of crap waiting to get put on shelves right near the entrance. This Walgreens has made us late for dinner. We hate them. 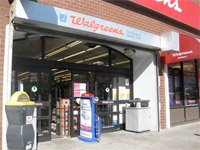 People really hate this Walgreens. It's tiny, poorly stocked, they put things like $5 Visine and baby formula under lock and key, and the pharmacy staff are allegedly incompetent and rude (we can not attest to this as we do not go to the Sunset). Oh, and to make matters worse, "their selection of Ritter Sport Chocolate is pathetic." Now, that, dear friends, is inexcusable.

This is probably the worst stocked store in the city, and the worst lit, and for obvious reasons it is always teeming with the sketchiest of the sketch. The checkout is weirdly situated, their grocery selection is worse and dustier than most nearby bodegas, and you will regularly be accosted/asked for change on your way in or out of the door. It is a necessary pit stop for many of us stepping off BART and in need of a cough drop, but god help you if you need cash back from your purchase or, like, an up-to-date magazine. Enter at your own risk, but that probably applies to half the (non-gentrified) Mission. 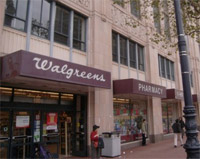 Beating out some formidable competition within just blocks of this one (see also, Van Ness and Market), SFist declares this to be the most horrifying and depressing Walgreens in all of San Francisco. It is a grotesquerie, a meth-addled circus, a loud and chaotic circle of hell. The bedraggled masses lumber down here from their Tenderloin SROs, or from nearby substance-abuse facilities in SoMa, to loiter, harass the pharmacy employees, shoplift, ask anyone and everyone for change, and generally smell up the place. For that reason, the store may smartly keep limited hours, so don't bother coming here after 5 p.m. on a Sunday, or after 9 on a weekday, which are times when we would typically find ourselves in need of condoms and paper towels. Also, they keep the soap in lock boxes here, as they do in only the worst neighborhoods, and the employees' commitment to their jobs is a joke. Like, a hilarious joke. A joke only they are laughing at while chatting on their cell phones, placating the crazy, and scowling at you after you've waited in line for ten minutes. Yes, friends, this is the kind of Walgreens we imagine we'd find in hell. But it's right up the street.

Honorable Mention:
Lower Haight - Fillmore & Haight - Prior to being damaged and closed by that fire, this Walgreens would certainly have made our top five worst, frequented as it was by speed freaks and denizens of the nearby projects, with its narrow, cramped aisles and unique odors. But alas, it is closed. Today we get news that they're expanding it, and it will eventually reopen. We can hardly wait.

La Cocina's 2012 San Francisco Street Food Festival will be held this summer on August 18th, from 11AM - 7PM in the Mission District. The annual event raises cash for the non-profit's incubator

At yesterday's meeting the Board of Supervisors unanimously approved a 10-cent fee for every bag (paper, compostable, or reusable) your local grocer's bagman decides to hand out. While we've gotten used to not