We're getting word of a big fire in the Western Addition this afternoon, one that's reached four-alarm status. SFist's Andrew Dalton snapped this shot of the blaze. Marcia Gagliardi (AKA Tablehopper) sent out the following Twitter message about the inferno, "It's horrible with this wind. sky around my apartment is a terrible grey, looks like dark fog. poor people, this is awful. really bad fire."

We'll update as soon as we know more.

Update 12:18: According to KGO, the fire is at a "large residential building." You can check out live footage of the fire in progress here. The fire is a four-alarm blaze, which was reported just before noon, is located at 1502 Golden Gate.

So far, the fire is located at one four-story building. Although there have been no reports of any injuries, "[t]wo ambulances have been dispatched to the scene," reports KGO.

12:25: The fire roars as firefighters try to battle the flames now leaping through the building's roof: 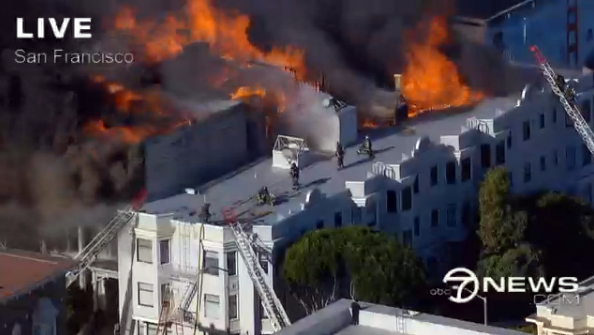 12:28: The blaze is out of control, it seems. "All firefighters have been ordered to get out of the building on fire in San Francisco's Western Addition," notes @abc7newsBayArea.

12:33: Fire has spread to neighboring building. According to SF Appeal, a fourth alarm was called in as well. 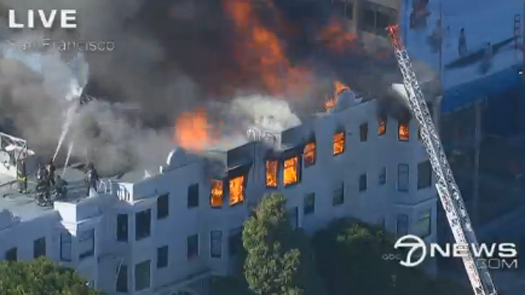 12:39: All streets in the immediate area are closed. The public is being asked to stay away from the Western Addition/NOPA/Alamo Square area for now.

12:40: A fifth alarm has now been called. This fire is completely out of control. Building is being described as "very old" by Captain Denis O'Leary. A Shelter-in-place has been declared. No injures have been reported.

12:50: 30 MPH winds are whipping up the fire. The wind is mostly blowing southwest towards Divis. Andrew Dalton, located near the fire, says is apartment reeks of smoke.

12:52: Residents are standing outside trying to account for all of the pets who made it out alive. Sad.

1:00: One person has been sent to the hospital for smoke inhalation. Here's a shot from the other side of the area, via CBS 5. 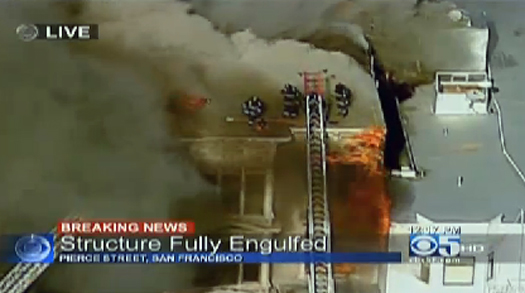 1:06: Here's a shot of the fire taken from the Kaiser parking garage taken by @McClure_SF. 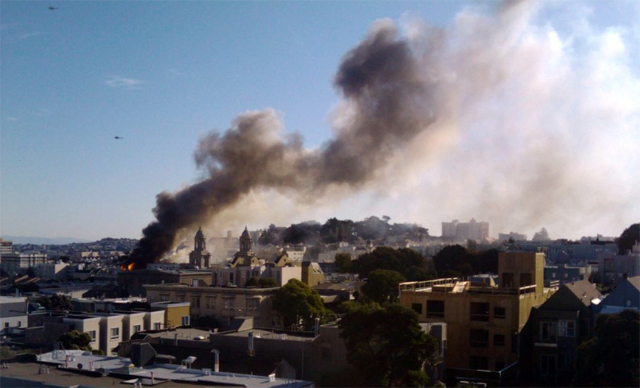 1:13: According to KTVU, a nearby senior citizen home is asking for assistance to evacuate 90+ residents. Building is on McAllister. 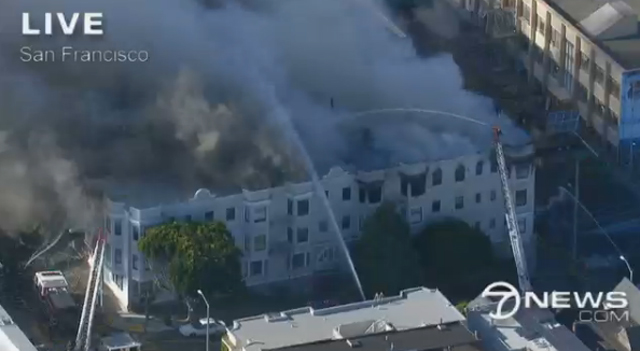 1:27: A sixth alarm has been called in, reports KCBS. Is that even possible? [Twitter report has since been pulled.] At least three buildings have been destroyed.

1:35: SFist's Andrew Dalton (reporting to us live from the scene) tells us: "Went back to check out the Assisted Living place on McAllister. It's extremely smokey down here, but a woman with the home told me they're doing fine getting everyone out." 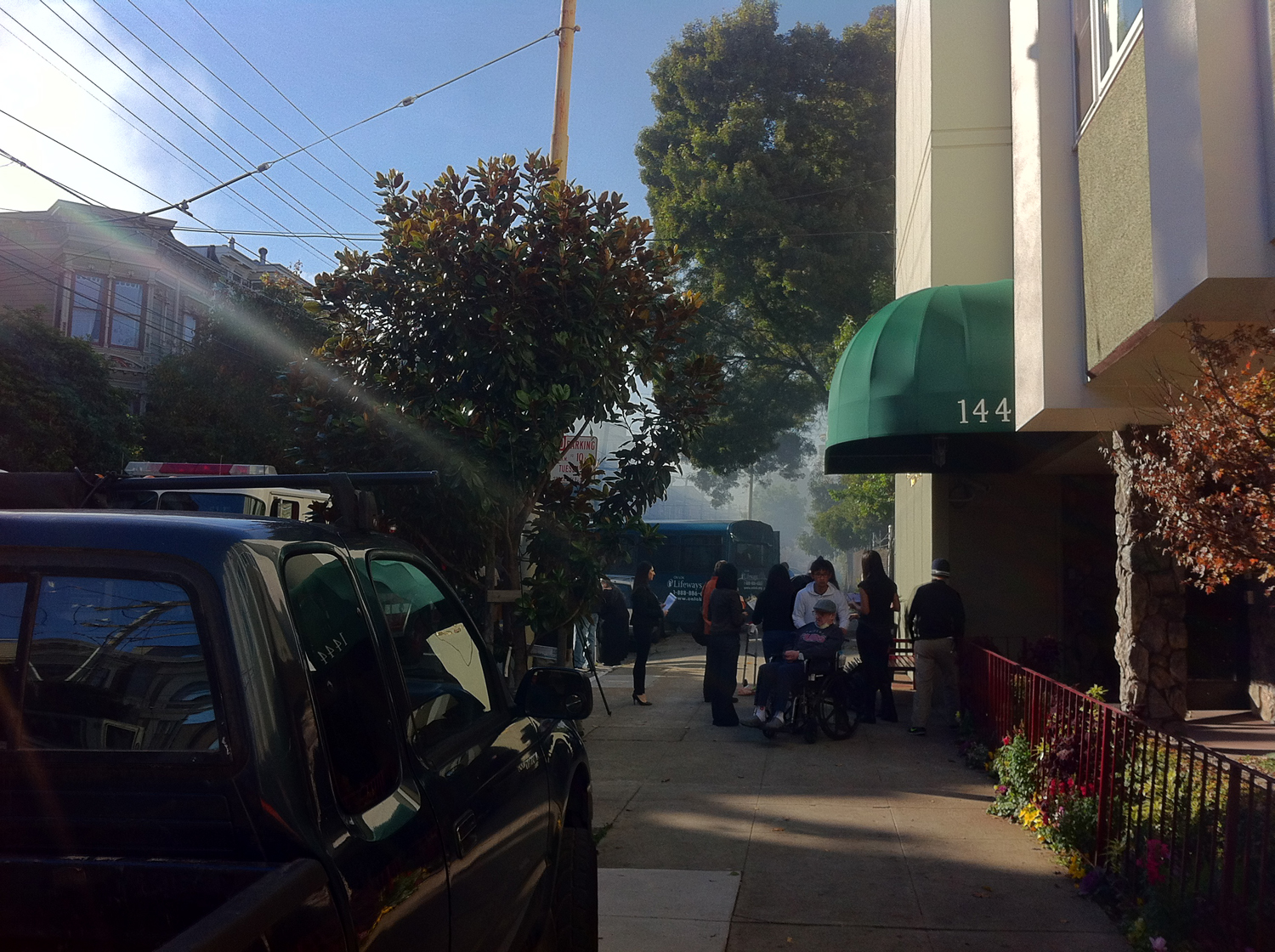 1:55: Via Sam Bartos at Bay Citizen, here's some raw footage of the fire:

2:01: A re-routed 5-Fulton is stuck blocking Divisadero northbound at Hayes. (Get it together, Muni. Really.) Divis is getting backed up to Fell and Oak. Please be advised.

2:06: One of the buildings destroyed, according to The Chronicle, is an "almost century-old four-story apartment building at 1015 Pierce Street" just off Alamo Square. 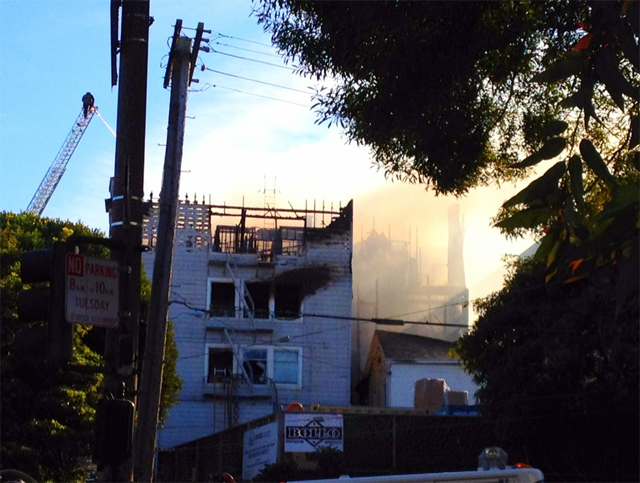 2:15: Two firefighters transported to the hospital with fire-related injuries.

2:20: Reminder: Red cross can't take donations other than money, which goes to fund the next disaster response. Any sort of donations for the current victims will be announced later.

2:26: Fire continues. Dalton reports, "Still a lot of smoke coming from the corner building. Flames are lower but it's still going." Shelter-in-place still in effect. Also, Haighteration has some choice photos of the horrific blaze. One example seen below. Be sure to check them out. 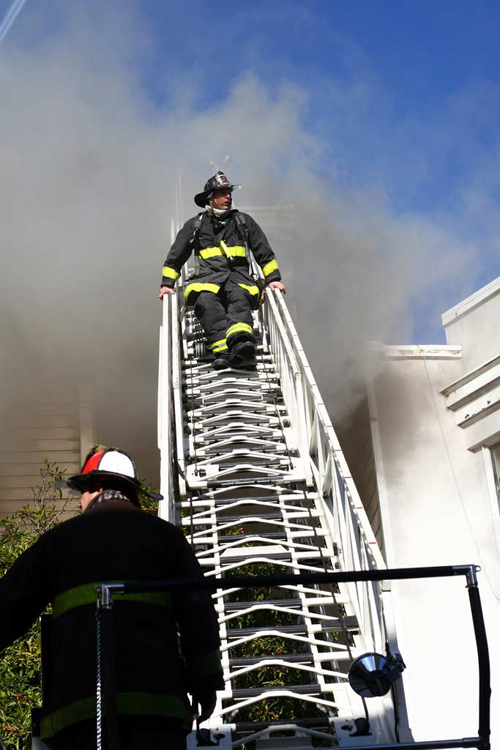 2:37: Dalton took this photo of a girl, somewhere around 8 or 9 he estimates, who evacuated the building safely. Amazing shot. 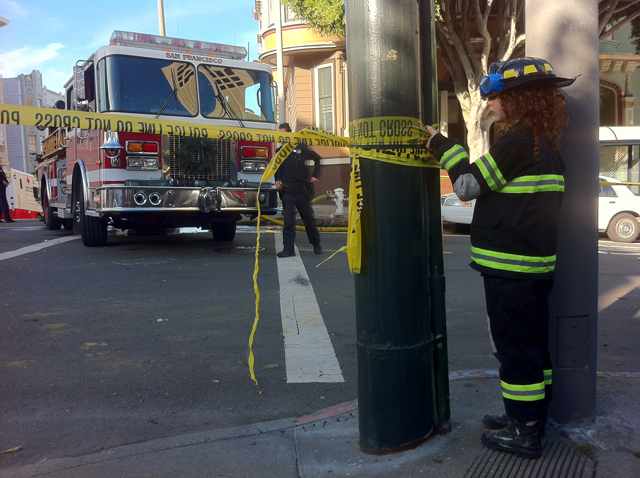 2:45: San Francisco Supervisor and sheriff-elect Ross Mirkarimi, who represents the neighborhood, was at the scene today. "This is gut-wreching because we’re in the heart of the holiday,” Mirkarimi told CBS 5.

2:53: Fire is starting to subside, but still blazing. Winds are making the battle that more difficult for SFFD. "Don't see any more flames but they're still hosing down the building on Golden Gate. It's smoldering pretty good," Dalton tells us. 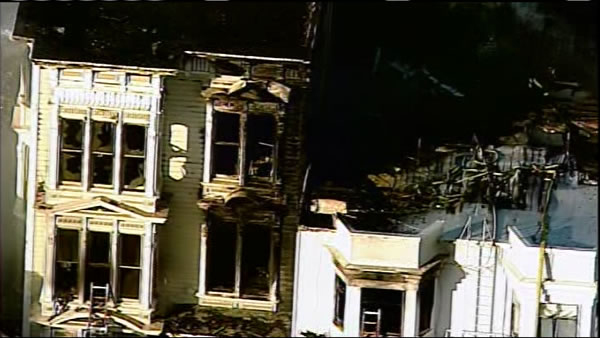 3:13: DONATION INFORMATION: Red Cross will be at 1455 Golden Gate tonight and tomorrow taking donations of clothes, etc. After tomorrow go to downtown Red Cross (85 2nd Street, San Francisco) for monetary donations only. (They will not accept items at the office, only donations.) Here's a helpful post about where and when to donate.

3:55: Evacuation shelter set up at 1455 Golden Gate Avenue at Missionary Temple for people displaced by fire near Alamo Square.

Yesterday evening Occupiers in Berkeley's Civic Center park, like so many Occupiers before them, received an eviction notice. Citing increased crime in the park, Berkeley Police gave the campers a 10 p.m.

One of the universe's depressing cruelties (besides genocide, rape, hunger, et al.) is that one can neither nuzzle with nor scratch the belly of a giant bear. Because said giant bear will probably