Protesters have headed to The Port of Oakland this morning in a part of a West Coast economic blockade to stop shipments from coming or going. Los Angeles, Long Beach, Portland, Anchorage, Seattle, Tacoma and Houston are all taking part in today's effort to "attack the 1% at their point of profit." So far, hundreds of protesters in the East Bay, marching and banging drums, have blocked trucks from entering the port. The scene is reportedly peaceful even though cops in riot gear have arrived.

While the official West Coast Port Shutdown site calls for a gathering downtown at 3, and at W. Oakland BART at 5 p.m., folks have arrived earlier than planned. According to the Occupy Oakland Twitter feed, "PORT OF OAKLAND IS _NOT_CLOSED! maintain pickets!"

SFist will continue to update throughout the day as the occupation of West Coast ports continues. Below you can check out live footage of the scene in progress via OakFoSho.

8:58: It's worth nothing that, while strongly supporting the November 2 general strike, the county's construction workers have come out against Monday's shutdown, "saying the port has provided jobs to many unemployed workers and apprentices." The local teachers union, however, supports today's effort.

9:05: Cartoonist Susie Cagle reports, "Picket still going but traffic is now flowing on the road. Crowd thinning. I bet a lot of ppl left for work."

9:22: May we take a moment to commend OakFoSho for his stellar livestream reporting job from today's Port of Oakland? He's not being intentionally obtuse (something befalling some staunch Occupy reporters), using one buzzword after the next, and had one-on-one interviews with fellow protesters. As far as advocacy journalists at the scene goes, he's top drawer.

Anyway, protesters remain at the scene chanting about police, Oscar Grant, and the usual.

9:37: Protesters are singing Christmas carols (we can officially call "These Are a Few of My Favorite Things" as a holiday tune, yes?) and blasting Michael Jackson's "Smooth Criminal" outside the Port of Oakland. Rodgers & Hammerstein & Jackson? This is our kind of protest, people.

11:15: Via a friend with friends at the port: "truck drivers are giving thumbs up, chatting with occupiers!"

12:20: A couple of arrests were made at this port this afternoon. Meanwhile, in New York City, NYPD blocked a New York Times photographer from taking photos of arrests.

12:35: Zunguzungu captured scenes from early this morning en route to the Port of Oakland. This image here, featured ladies drenched in red and fists raised just outside the port, seems particularly noteworthy: 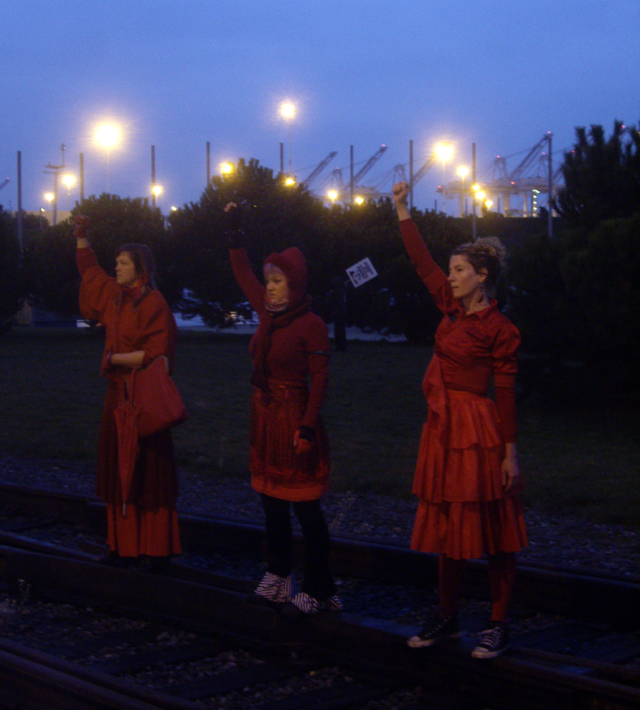 12:40: Oakland's Office of Emergency Services plans to hold a news conference regarding protests at Port of Oakland this afternoon. Also, as KGO reports, someone erected a verboten tent at Frank Ogawa Plaza. Could this mean a reoccupation of said plaza is afoot? Behold: 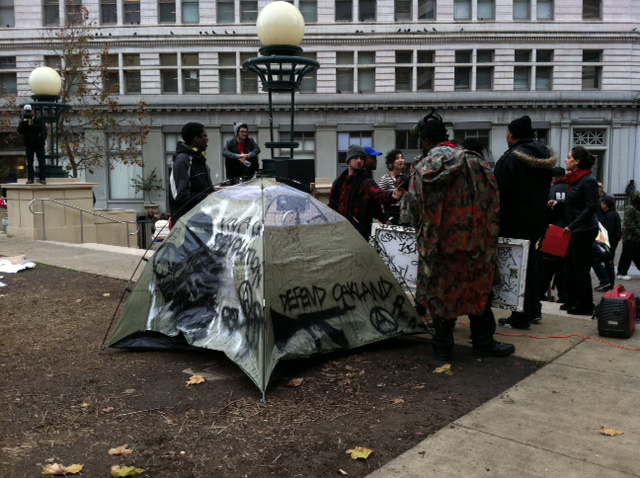 1:10: Port of Oakland is officially shutdown, reports Daily Kos. Also, our favorite Port of Oakland Twitter update is a pressing one, sent out by furniture store owner Polly Harrold:

My container full of hand-built furniture from Italy was due in in Port of Oakland yesterday -- we'll see it Thursday, regardless of strike.

4:30: Injured Iraqi War vet Scott Olsen came out to speak a little earlier. Here's a photo of him.

5:00: According to CBS 5, "hundreds" of protesters are en route to the Port of Oakland (again) to shut it down (again?). Here's a screen shot of protesters making their way to said port: 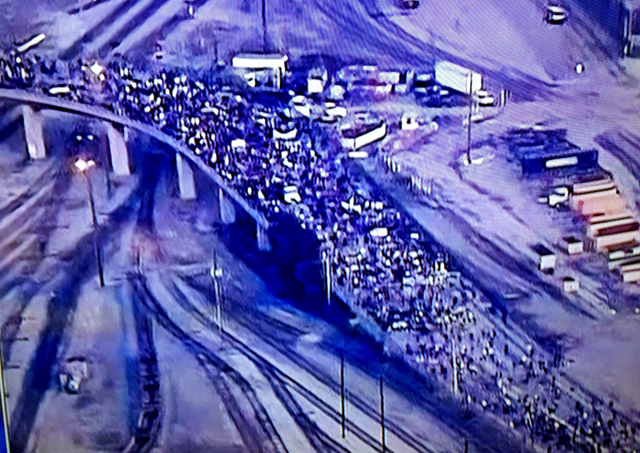 In a Christmas miracle for fans of music from the 90's Green Day stepped in to save Live 105's Not So Silent Night concert after Jane's Addiction had to pull out. [Live105] People

Continuing with the momentum of last month's general strike, Occupy Oakland has organized a West Coast Shutdown to begin bright and early on Monday morning. The group has joined forces with Occupy groups

—
Occupy Descends Upon Port Of Oakland [Updated]
Share this