We're doing away with our weekly roundups in which we read the weeklies for you because, well, reading is hard! No, but seriously, it's usually the cover pieces that are of worthy note in either the Weekly or the Guardian, and these cover pieces are going to be judged by the average Dick and Janet on Market Street by the quality of the cover art each of their respective art departments chose. Without further ado, our new feature in which we pit the rival papers against one another and judge them by their covers.

SFWeekly: Andrew Nilsen's stark red cover design illuminates Peter Jamison's cover story this week. The piece examines just how hard it is to actually convict someone of a hate crime, even in a town full of minority groups. The cover, meanwhile, appears to depict a menacing skinhead's silhouette. The thin question mark on the mysterious assailant's forehead evokes a Manson-esque swastika, but the punny title (Dickens even, yeeesh) and the red background are about as subtle as that baseball bat. We give it a C- for sensationalism and uninspired clipart selection.

SF Bay Guardian: Yikes! This disaster of a Photoshop job you see on the right goes along with a pair of food policy articles: one about California's food aid shortage and another San Francisco's "food divide". (Not a general food shortage, mind you, but a shortage in food aid). It's not the most easily compelling story to begin with (so many numbers!), and this ill-conceived cover isn't helping. Is someone locking up our produce? Is this another thing about surcharges on paper bags? Why don't the chains fall down? Extra credit awarded for managing to sneak in the quaint line: "Here's something to chew on with your bagel and coffee—" right at the beginning of a print article, but overall we give it a D for the misguided concept.

Honorable Mention: The East Bay Express, a companion to many a transbay commuter, has "SEX" emblazoned in big, red letters on the cover to go along with Rachel Swan's piece on polyamory (which includes a nice section with Sex at Dawn author Christopher Ryan). The cover probably won't be winning any design awards, but you know: Sex sells free newspapers, as it were. 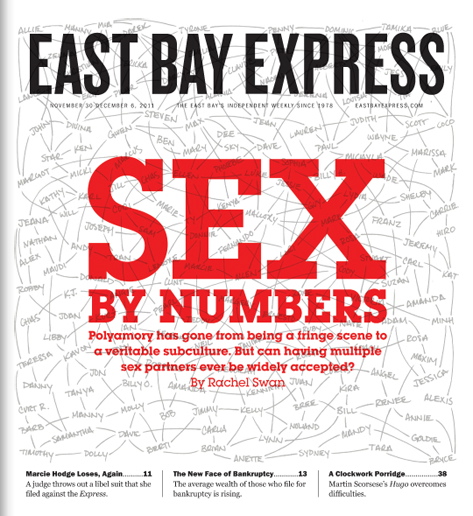 MUSIC: Pianist/M.C./producer/band-director Kev Choice premieres excerpts from his new hip-hopera: The Chosen One in a special "The Art of Composition" performance, which will also feature other work Kev Choice