After meeting up with hotel workers at the Hyatt (employees who have been in a union battle years), Occupy SF protesters have marched towards Wells Fargo on Montgomery and California. The general sentiment is frustration that banks received a bail out while regular folks suffer during the economic crisis. According to Sal Castaneda, "OccupySF protesters have arrived at Wells Fargo World Headquarters on Montgomery near California Sts., blocking entrances. Expect delays."

The group convened at Market and Drumm streets at 7 a.m. this morning. Some protesters, according to BCN (via SF Appeal), "held signs reading 'Foreclose Wall Street,' 'Stop the corporate greed,' and 'We are the 99 percent.' "

Two political candidates for SF Mayor, Joanna Rees and John Avalos, have used this morning's protest to garner votes, get their face out there, and voice their support.

Update: Hundreds of protesters are blocking the Wells Fargo on Montgomery and California. Police have started making arrests.

8:25: Helicopters hovering about Federal Building and Wells Fargo corporate offices on California. Police have closed off Montgomery and Sacramento. 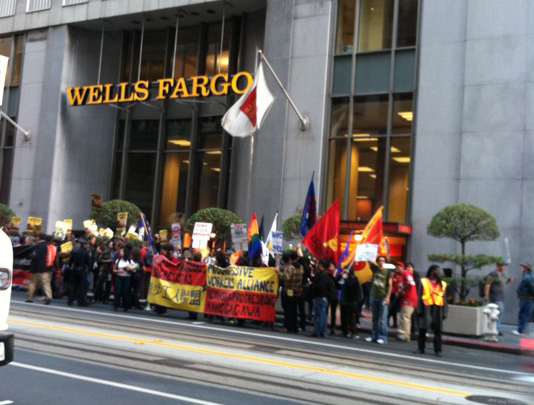 8:32: Though chaotic, the scene is a peaceful one, reports KRON 4 Morning News.

Here's another scene from this morning's protest that turned into a blocking of Wells Fargo office in San Francisco's Financial District: 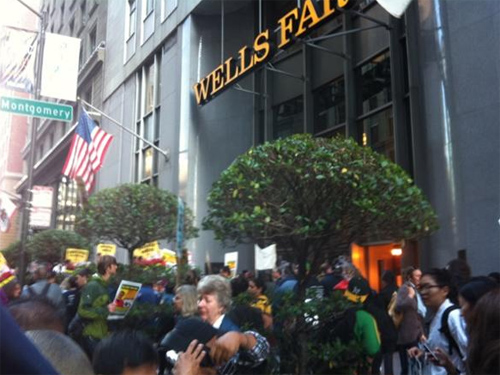 8:40: At least 11 12 protesters have been arrested. According to Benjamin Bloom, some folks trying to get to work aren't thrilled about encroaching on the protest. "I feel like a scab crossing the picket lines," said one Wells Fargo employee.

8:46: Occupy SF protesters have surrounded the entire building. Employees don't feel safe trying to get inside. "Frenzy of 10 minutes ago has slowed," reports KRON 4 Morning News.

8:57: Live music happening at the protest. Also, service on the 1-California bus and California cable car have been suspended. (Use the Stockton bus instead.)

9:15: Wells Fargo still closed off. KRON 4 Morning News interviewed an excited, yet insipid, protester from Mills College. Terrible spokeswoman on all accounts, completely lost focus and said that the protest was about, among other things, transphobia and cats. (Huh?) Anyway. 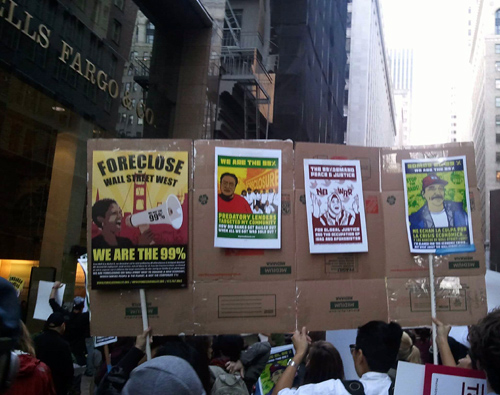 9:42: Some protesters bought their offspring to take part in and check out today's Occupy SF protest. Here's a shot of a kids' corner in front of Wells Fargo. 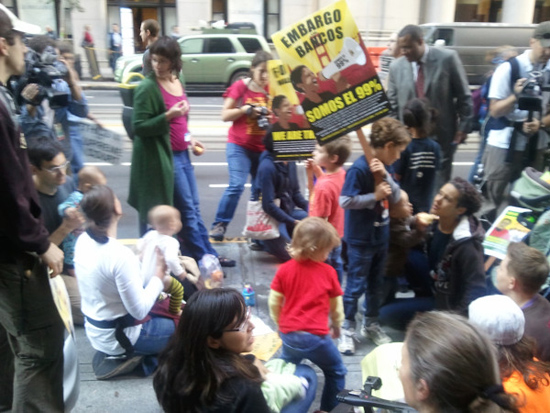 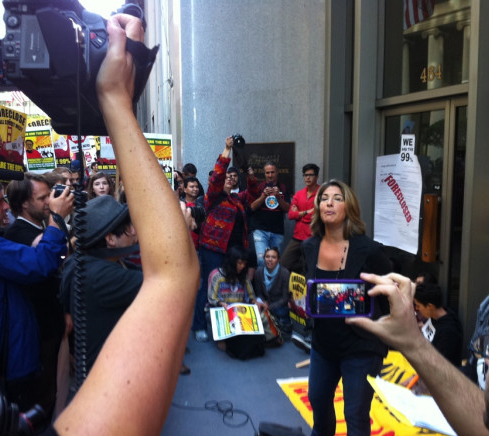 Another East Bay PG&E outage took out BART last night. The outage closed the Downtown Berkeley station for about two hour. [BCN/Appeal] Is the Muni stop at Hyde and Turk

Get Your Flu Shot with 211 and keep your grimy rhinovirus off the rest of us. [SFAppeal] Everyone is talking about The Ed Lee Story: An Unexpected Mayor, the new book about Ed