July is harsh in San Francisco and the midday sun will soon give way to another night of cold, misty fog. Should you need a disposable blanket and/or bit of kindling, you'll find an abundance of such things just waiting at every street corner, liquor store and coffeehouse in the city. And if you're bored, you could also read them. So, in our ongoing efforts to help you survive, here's our brief roundup of which pages are worth reading, which pages you can burn without regret and which pages might warm your heart with a chuckle or two:

Worth Reading:
Kaufman reviews Txoko - read it for the Basque pronunciation guide. And so you can feel fancy when you tell your foodie friends about the latest addition to the "brainy" small-plate trend.

Funny:
Joe Eskenazi's cover story "Inefficient by Design" is funny-in-a-sad way. It's a survey of San Francisco's many commissions and citizen groups that push for ridiculous things like banning goldfish without any authority to actually, you know... ban goldfish. That part is funny. The sad part is that the media outside of the Bay Area thinks these groups are real, lawmaking bodies and then they write headlines like "San Francisco goldfish ban exposes the pathology of America's bourgeois liberal nutjobs."

Bouncer: Zeki's Bar - Katy St. Clair's bar reviews are more than just bar reviews, they're anthropological studies of San Francisco's gin joints. Her writeup of Zeki's, "the friendliest bar in San Francisco", is no exception. Come for the bar review, stay for the zingers.

Don't Bother:
Go Corporate, Young Man — what we thought was a review a new album by The Cool Kids starts off strong with an allusion to Horace Greely (in the print headline, anyway), but falls apart when it takes a paragraph to explain what Mountain Dew is and why PepsiCo has put together a "music company" (not a record label, mind you). So, like, how's the record?

Bar Tartine. Also Bar Tartine's wine list. We get it, Bar Tartine is different now, but you're smothering us. We need space. 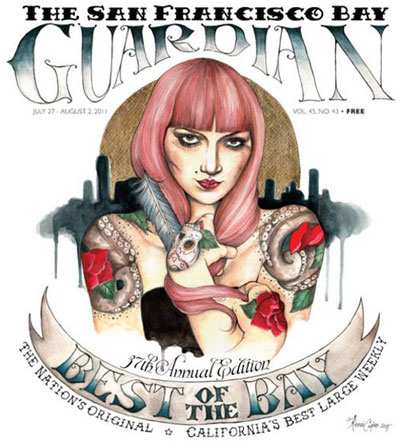 Worth Reading: It's the Best of the Bay Issue, so the whole thing is worth picking up to peruse at a leisurely pace. Maybe you'll even remember learn about some new local treasure you ought to patronize or otherwise appreciate. At the very least, rest it on the back of your toilet for the next few weeks.

Don't Bother: The two actual news pieces this week: Anger Erupts Over Police Shootings and Taking Out the Trash are already out of date. Read only if you desperately need that progressive Guardian voice in your life.

Funny: There are plenty of puns to be had in the Best-Of category names. 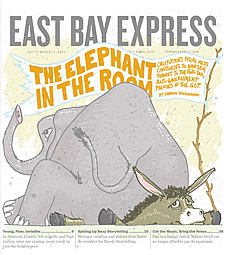 Worth Reading:
Dan Savage is more informative than funny this week as he explains how incest could happen to anyone.

Funny: The Art and Science of Tater Tots - in which John Birdsall, noted fan of vernacular foodstuffs, tries to make us take tater tots seriously.

Don't Bother: The East Bay's Club and Concert Calendar - Because why would you want to go to the East Bay? (We kid! Read it, then suggest an outing where you can meet up with your estranged friend who moved to Piedmont.)

Alex Smith: We've Still Got Him to Kick Around [SF Weekly] Kindler, Gentler Wrap-Ads Coming to Muni -- But To Only 15 Buses, Trains [SF Appeal] Will Petco Just Roll Over? [Curbed] FOX

Today's palate cleanser comes to us from a strange little place called NYU, where this music video was produced for a campus reality show. Yes, we know, bemoaning the annoyance of hipsters and