In this week's column, our friends at the Tenderloin Geographic Society earn their hardboiled bonafides as they bring us on a tour of the darker side of San Francisco's literary history: crime fiction.

By: The Tenderloin Geographic Society.

What you don't know about this city could drown a man. History, like a lead weight, a pair of concrete shoes just about your size.

To listen to the tourists talk, The City's boiled down to the Holy Cs: Caen, Crazy Crab, and Cable Cars. Beloved as those things are, let's agree to talk about something else. Brass tacks, folks. Gumshoes. The history of Samuel Dashiell Hammett, Pinkerton Operative and writer of note.

What'd we know about this character, Hammett? We were wet behind the ears when we started with Raymond Chandler. But a chance meeting with James Ellroy put us straight. Ellroy said that Chandler wrote about the man he wanted to be; Hammett wrote about the kind of man he feared he was. Sounded like we could learn something if we stuck around.

Any good historian knows that the best stories are to be ferreted out in the gutters, so that's where we start. Or rather, outside the Main Library, where we're instructed to meet our man. Hell freezes over and we take a tour in our own town. To what do we owe the pleasure? May 27th was Hammett's birthday, so it was the least we could do to finally take the tour Don Herron has been giving for 34 years. 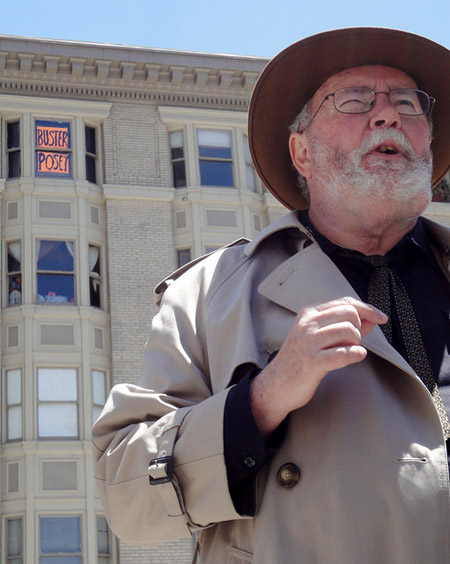 That's Herron, in the fedora and trenchcoat. Despite feeling like we've eaten crow at taking a tourist's approach, it's soon apparent that most who choose this beat are locals, and they're simpatico. We're not about to ruin the man's line of work with any further spoilers, so you'll have to hit him up for his next tour.

Meantime, let's get our story straight.

Dashiell: pronounced Deh-Sheel after the French De Chiel, but this is America where we pronounce things they way we like. He was poor and sick most of his life, serving in both WWI and II, a strikebreaker operative, later a card-carrying Pinko. Tubercular, typed for a cent a word, made and lost millions.

But who’re we to count? Herron’s tour is not for the facts, instructive as they are. His is a history of pulp, of "smoking the keys" and the lives of men who lived and died to write for The Black Mask. He reminds us that the least of our concerns ought to be the misspelled street sign or erroneous dates on a plaque.

Romantic associations involving San Francisco are purely mythological. The starry-eyed need not apply. Get your heels to the tar and trust no one.

The Tenderloin Geographic Society is San Francisco's home for colloquial cartography and citizenship services since 2006, and amateur ornithology since 2010. If you've missed any of their weekly contributions to SFist, you can always catch up here. And don't forget to stay tuned for the Tenderloin Report.

Don Herron's noir city tours can be found on his website, DonHerron.com

“He always liked the extravagant gesture.”

Friend of SFist, Kate, picked up this awesome pastel drawing on a sidewalk in Berkeley the other day, which features the intriguing headline, "Vicodin Pool Party." Kate hopes to return the poster to

Maybe you took a four-day weekend and drove up the coast, got a welcome reminder of the landscape that's so close, yet seems so far from the city for reasons that must have

—
Urbane Studies With The Tenderloin Geographic Society, Volume 20: The Society Op
Share this