Yesterday's board of supervisors meeting was Sean Elsbernd's time to shine. Because if there are two things Elsbernd gets excited it's Zanze's cheesecake and demolishing some postwar garden court apartments to make room for the new, improved Parkmerced Plan. We kid! No one is just going to bulldoze Parkmerced all willy-nilly like that. Slicing up that issue is more like cutting through that Zanze's cheesecake: delicate, but with a sturdy graham cracker crust keeping it all together. So it was good we got to tackle the Parkmerced plan first yesterday.

The board already heard public comment on the Parkmerced items a few weeks back, President Chiu spared us all from the commenters and Elsbernd gave his speech without an opening act. Emphasizing his main point, the D7 supe called on the board to name the last time a supervisor actually wanted to add 5,500 new units to their district. As he explained, "this is the West side of San Francisco saying it is no longer appropriate for one side of the city to take all of the growth." It must not have bothered Malia Cohen that he just called her end of the city "inappropriate", because she ended up voting in favor of the plan. Jane Kim, on the other hand, apparently wants to keep all the development on Treasure Island, voting against the plan in the narrow 6-5 split.

But it was after Campos and Avalos both weighed in to say they wouldn't be supporting the project that Elsbernd got really fired up. First calling out Campos for opposing a project with so much Below Market Rate housing and then telling Avalos that we all know trying to add his rent control amendment would kill the project rather than help move it forward. +2 for Sean Elsbernd for just bluntly shooting down those attempts to derail his M-Ocean View extension.

With his amendment so cleanly sniped, Avalos, who has really been slumping in the rankings these past few weeks, managed to redeem himself by reminding us that he once had a sense of humor. First, he surprised C.W. Nevius with an on-the-spot recitation of the prologue to Chaucer's "Canterbury Tales", in the original Middle English, of course. Ignoring for a second the fact that Nevius is easily amused, your editor once had to memorize that same passage (also in Middle English) and we'll tell you - that shit is not easy. Every word has a "y" in it for no reason.

After the Deputy City Attorney explained that yesterday was the last day to debate the Parkmerced plan, Avalos snuck in another bookish reference: "That's some catch. That Catch-22," he said, leaning back in his chair and proving that English degrees can still have a useful place in society. (Which is to be the guy who laughs at his own book jokes.)

Later, during introductions, the D11 supervisor continued to be relentlessly likable and nerded out over a couple verses of "The Times They Are A-Changin' " which he recited for Bob Dylan's 70th birthday. We're not sure if he intended it as a progressive theme song or a sharp jab at us critics who prophesize with our pens, but OK! You win this one, +2 for Avalos. Here's his cover version, which we include because it will probably embarass him slightly:

The other major items: the Housing Elements plan was pushed back three weeks on Supervisor Wiener's motion and the AT&T network upgrades item got pushed back another five weeks as well. Meaning in four weeks and six days, the newspapers will be running stories about how the AT&T Plan is back before the board tomorrow. Prepare yourselves accordingly.

That left one item, an appeal of an environmental review exemption for a new patio at the Brick Yard bar on Union Street, as the last big issue at yesterday's meeting. On the NIMBY side, the usual assortment of nearly retired neighbors came out to trash the place for being noisy and attracting unruly crowds. One neighbor went so far as to point out that "Sports bars cater to entitled drinkers.", which: +1 to that guy. Surprisingly, those entitled drinkers actually showed up in gel-spiked droves wearing their nicest spread collar button downs over printed tee-shirts to show support for their beloved sportsbar. From the show of support for the bar you would have thought it was a historically significant refuge for breeders. Or at least like a Pittsburgh Steelers bar or something. 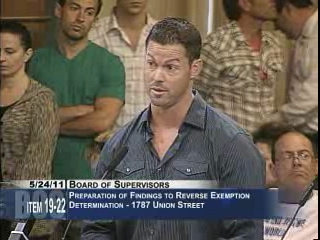 Luckily, before the semi-retired could really clash with the disposable-incomed, Supervisor Farrell stepped in and offered "empathy and resources" to both sides, allowing the bar to proceed with their new patio and promising to have his office monitor any noise violations. Well played. +1 for Farrell.

Apparently Supervisor Kim hasn't done any work since last week, so she wanted to go back to the part where we recognized small businesses for being fiercely independent and all that. She used her time during special commendations to recognize Rickshaw Bags for leading the charge to bring manufacturing back to San Francisco. Funny - we would have figured Supervisor Kim was more of a Timbuk2 girl, but either way that brings us to your moment of Kim: 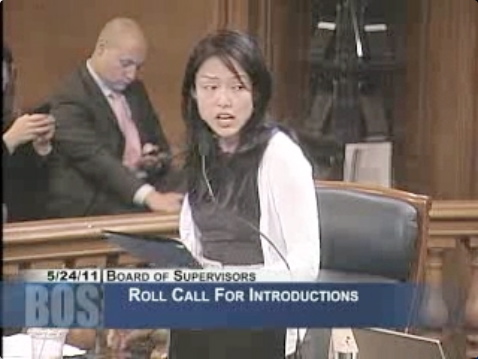 With that we have our first all-positive scoring episode: Sean Elsbernd finally gots his day in the sun, Avalos once again pulled himself up by his bootstraps (although he's still got a lot of ground to make up) and Mark Farrell takes over the top spot because he just seems like a cool dude who doesn't want people to fight. Everybody else, well we assume they were there in the chambers, we just didn't hear from them.

Edgar Meyer and Marc O'Connor collaborated a decade ago for Appalachia waltz and Appalachian Journey, a genre blending classical-meets-bluegrass string trio (Meyer plays the bass, O'Connor the fiddle, and Yo-Yo Ma completed the

—
Board of Supervisors Weekly Power Rankings for Wednesday, May 25th 2011
Share this