After last week's meet-the-mayoral-candidates event at the Chinatown YMCA, we came away with a sophomoric impression of Joanna Rees: that she was definitely your girlfriend. Which is to say, she strikes us as the type of person you've probably dated in the past. (The collective "you", San Francisco) You know who we mean: she's the gal who means well and is certainly friendly enough to meet your friends at the bar even though she orders lame drinks like Cosmos, but she's maybe not the one, as it were. (In this metaphor, electing a mayor is like getting married, apparently.) Anyhow, her Sex and the City-themed cocktail hour yesterday evening definitely didn't change that impression much.

Held at Jones, a 5-month-old rooftop patio bar in the Tenderloin named for the street it's on (although that was a convenient tie-in), the $50-per-head fundraiser featured the opportunity to meet Jason Lewis in a bar that uses iPads for cash registers and has the kind of Euro-style bathrooms that probably play host to all kinds of unmentionable acts during the nighttime hours.

Superfans and casual Mirandas alike will probably remember Mr. Lewis as Sex and the City's cougar-bait character Jerry Jerrod/Smith Jerrod/Absolut Hunk who, as far as we can tell, has little to no connection to San Francisco politics other than somehow being friends with Joanna Rees. (Although he is very friendly in person.) To complete the ambiance the bar offered $1 Cosmopolitans, which are largely regarded as an abomination in a martini glass these days, but also: who wouldn't be swayed by a $1 drink? (Full disclosure: this SFist editor had two.) 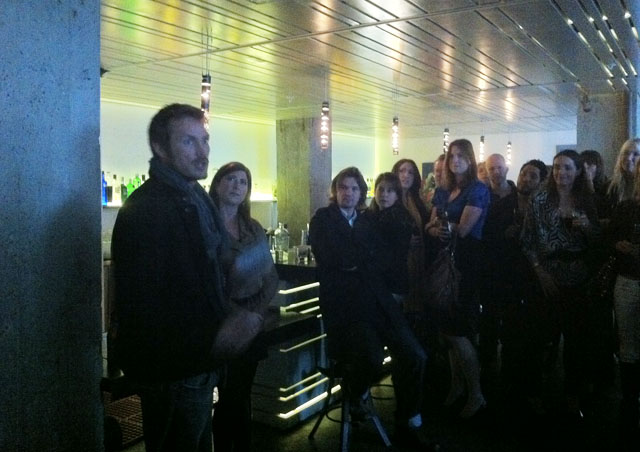 Cringe-worthy Sex and the City references and lime-laden amateur cocktails aside, most of the modest crowd appeared to be fervent Rees supporters and a couple people who told us they had just been hanging out there since brunch. Still, Rees took a moment to recap for the Sunday drinkers some of the issues that came up during her town hall meeting at the Mission YMCA the night before, the two biggest seemed to be: 1) That she's too young and 2) That she's a woman. To which the appropriate responses are: 1) She'll be 50 this year, which seems like a perfectly reasonable age to be running for mayor of a major metropolitan city. And 2) So what? We live in a post-Sex and the City world where women can do whatever they want, even become successful venture capitalists or Mayors of cities.

So in that regard, she has (so far) addressed all of the concerns of her detractors. The next concern she'll need to address though is the ratio of photographers to normal folk at her events. When the camera flashes started going off during Lewis' supportive speech (written in sharpie on a piece of folded notebook paper), we realized we still weren't quite totally clear on what she stands for. Job creation, maybe? Something about being a mayor for "our neighborhoods" ? We're still not sure - the flashbulbs were a bit too distracting.

Lewis delivers a speech before a modest crowd at Jones.

Hey, everybody! Guess what? Niki Taylor is in town. She's here to give San Francisco money. Because we're broke, that's why. Who is Niki Taylor, you ask? Well, first of all, shame on