Monday night in the gymnasium of the Chinatown YMCA, seven of the total 24 declared candidates for Mayor showed up to discuss their respective platforms and shill for an audience assembled by Chinese for Affirmative Action (or CAA to the cool kids). As recent reports have indicated (and duh, you might have guessed), the Asian community's vote will play a large part in this year's elections, so those candidates in attendance were looking to make a good impression. Thus, we give you our brief analyses and general impressions of speeches given by seven mayoral hopefuls in front of a modest audience at a YMCA in Chinatown:

Michela Alioto-Pier: Taking the first turn on the microphone, Michela's message of improving schools and creating jobs seemed to resonate with an audience that was less-than-impressed by mentions of her grandfather, former Mayor Joseph Alioto. (Funny, we thought there would have been some identification with the desire for dynastic rule.) Still, she might have done well to remind the audience that her grandfather is credited with opening up city politics to more minorities. (And, unfortunately, also being Mayor during the Zodiac killings.)

David Chiu: Despite currently holding last place in our Weekly Power Rankings, the board president stood confidently on the podium as though he were about to swiftly deliver a roundhouse kick to the head of some unruly audience member. (With all apologies to Bruce Lee, that is a stereotype and we should be Affirmative Actioned for that.) Still, Chiu embraces stereotype to a certain degree - he mentioned he's a big fan of San Francisco-based Hyphen Magazine and based on his brief speech, "Diverse Communities!" appears to be his current campaign slogan. 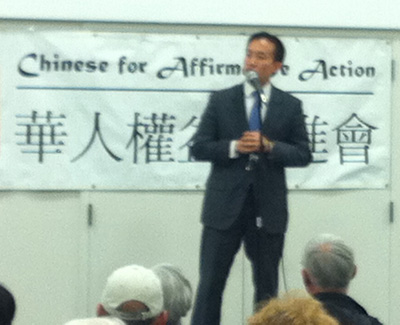 Tony Hall: Unlike Chiu, Tony Hall walked the floor as he gave his speech. It was a real Bill Clinton-esque move if we ever saw one and it fit well with his message that he doesn't serve any "political machine that's been running this town." (You know what he's talking about, Chinatown.) His 30 years working for the city are indeed impressive, but not as impressive as his delightful radio voice. If this mayor thing doesn't work out for him, we know a struggling radio station that could probably use a new DJ for the Weekly Top 40.

Dennis Herrera: The City Attorney made sure everyone in the room remembers he threw his hat in the mayoral ring way back in August. While we appreciate Herrera's foresight, we can't get over the fact that Herrera looks too much like a comic book mayor. Like he's secretly curbing crime by working closely with a local superhero (or at least the Guardian Angels). Always nicely dressed though, that Herrera.

Wilma Pang: Everyone loved Wilma Pang, but we're fairly certain no one (including herself) had any idea what she was talking about. She used her time to tell the audience about how she could be a great-grandmother, her travels around the world to Japan and Australia and the mixtape she made for CAA (of herself singing, obviously). By the time she ended her speech she appeared to be naming people she recognized in the crowd. All of it was absolutely delightful and we would not hesitate to endorse her as Mama Candy's obvious replacement for Mayor of the Bow Bow Cocktail Lounge.

Joanna Rees: Joanna Rees is your girlfriend. She goes on "listening tours" and says things like "we have to restore our economic engine." We have no idea what that means, but it sounded important. She also enumerated how many jobs she created as a Venture Capitalist by investing in nascent Bay Area companies and startups. Actually, when you think about it, that seems less like "job creation" and more like "keeping people busy with money."

Phil Ting: The City Assessor-Recorder explained why he took "an unsexy job" with the city - because it allowed him to find ways to pull in revenue at a time when the city is basically bleeding money. It was a gently convincing speech, which is why he'll either get a ton of support from moderates or lose them all to more charismatic centrist-progressives like Kung Fu Chiu.

The offices of Leland Yee and Bevan Dufty both sent their regrets for not making it to the event, but that still leaves 15 mayoral candidates unaccounted for.


David Chiu is as blurry in real life as he is on SFGovTV. (credit: Beth Spotswood)

Film icon Elizabeth Taylor died this morning of congestive heart failure at LA's Cedars-Sinai Medical Center. She was 79. Associated Press reports that she was surrounded by her four children when she passed