You can see Amanda Lynch’s art the second Garage Biennale pavilion in a show called “Fired!” on Sat. June 30th from 7-10. Swarm Gallery will feature the same show opening in Oakland on July 12 from 6-9, 2007.

What's the art scene at San Jose State like?
SJSU is often overlooked because it’s off the beaten track as far as the greater Bay Area art scene is concerned, but there are some really talented artists at work there. It also features six on-campus galleries that rotate new shows of student work on a weekly basis, so every Tuesday night there is a series of openings which makes the art scene pretty exciting on campus.

Describe your creative process
My process involves making clay, pounding it into slabs, firing it, drawing on it, painting it with under glaze, glazing it, firing it, attaching small 3D ornaments (a.k.a. sprigging), re-firing, re-glazing, re-firing, sometimes lustering, re-firing, and occasionally finishing details with oil-paint. 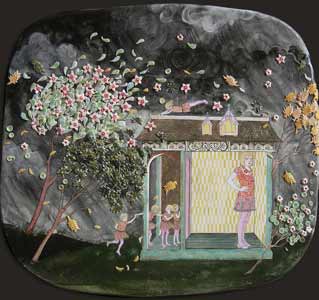 Why do you use girls in all your pieces?
I grew up in a house full of girls. I was raised by my mom with three sisters and my own life experiences have been influential in developing much of the character and subject matter of my work. I just feel more comfortable speaking through female characters. But even though the little girls in my work are partially derived from my own life experiences they aren’t intended to be self portraits and their activities don’t always reflect exclusively personal experiences.

How did you get into ceramics as a medium?
I was a painting major at Bowling Greet State University in Ohio and I had to take a ceramics class. At that time, Peter Voulkos was there as a visiting artist, along with several other prominent ceramic artists. These artists were a huge influence on me. I had never seen work like theirs before and I credit them with exposing me to the possibilities of the medium. As I continued to work in clay my art came to rely more and more on the aesthetic qualities offered by the medium.

What's your take on the Bay Area art scene-- tips for artists trying to break into the scene here?
I love the Bay Area art scene. There are so many talented and incredible people involved in it. I guess I would recommend that people just get involved. Attend openings regularly (there are a ton of them) and get to know the other artists.

The Muni security camera site may have gotten locked away, but we can still remember those few glorious few hours of spying which we were able to enjoy. In case you missed it,

We're reading on the Chron that unspecified "police action" between 25th and 30th Avenues in the Sunset has completely blocked the N Judah. MUNI is setting up buses between 19th and Sunset Blvd,