The last of our slightly less-than-timely coverage of the Alternative Press Expo, which took place last weekend, focuses on folks telling their sequential art stories in a longer form. 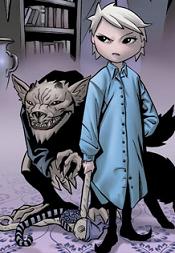 Ted Naifeh, a Western Addition resident, is the writer/artist of both the Courtney Crumrin series and Polly and the Pirates, which were both prominently displayed at his APE table (he's also been the artist for books that include Death Jr., Unearthly, and Gloomcookie , which he also co-wrote). The books at his APE booth follow an industry trend we really dig: they're several issues worth of stories bound in smaller-sized digests, perfect for toting around. We picked up volume one of the Courtney Crumrin story (Courtney Crumrin and the Night Things) and we really dug it. A girl with a rather testy attitude moves into a creepy mansion in a weird town and finds herself mired in several supernatural dilemmas. It's the perfect all-ages book: adult and kids alike will enjoy the story, while the adults will surely pick up on a more subversive vibe. The digests run about $12 each, and are available wherever Oni Press products are carried (which should be any good specialty comic store). 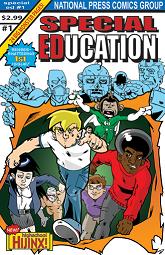 Dave Dwonch is a San Leandro-based writer and artist, probably best known at this point for his humorous riff on the superhero genre, Special Education. The book is the story of a high school populated by superheroes, or, specifically, the remedial class therein, as seen through the eyes of the main character "Special" Ed. It's an extremely funny twist on "hero high" stories like the X-Men and Sky High. We particularly enjoyed the remedial class teacher, "Dr. Zero," a retired, Dr. Doom-style villain that talks in a grandiose, megalomaniacal, third-person manner as he lectures his students.
"Comics are a rough business," he shared with us, but, in explaining the book's appeal, said that "Special Ed is an underdog story more than anything." The book's developed a fan base through word of mouth and Internet channels, notably comic-book-related podcast/Web community Comic Geek Speak, which has helped spurred sales. Mr. Dwonch is also a podcaster himself, one of the hosts of The Geeks Savants Podcast.

Speaking of Dave Dwonch -- did you know that there's a comic book publisher that calls Oakland home? It's the National Press Comics Group, and Jaimel M. Hemphill is its Editor-in-Chief.

Details on NPC, more creators, and more pics after the jump

Despite its strong following, we felt completely let down by Trader Joe's 99-cent whole-wheat dough: once rolled, we could not get it to remain stretched. In fact, its ability to retract to the

Did you get your tickets? We are speaking, of course, about free tickets to "Late Night with Conan O'Brien" which will be taping a week of shows at the Orpheum Theater starting on

—
APE Escape 2007 Part 3: The Storytellers--Traditional, With A Twist
Share this