On our tightly-packed MUNI ride to the Castro to the opening night festivities for the San Francisco International Asian-American Film Festival, we were squooshed next to three thrilled Asian-American film lovers eagerly listing all the movies they were planning on seeing over this week. Excitement is running high! 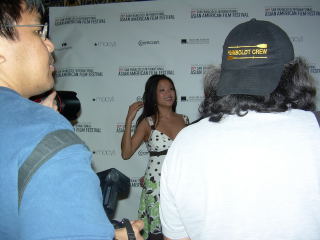 The SFIAAFF opening night screening was for , a faux-documentary comedy about the casting of a replacement Bruce Lee to finish Lee's last movie after his untimely death, directed by Asian-American wunderkind Justin Lin.

The mood got more and more buzzy as we neared the theater -- there was a green carpet arrival, with a woman whom we totally did not recognize mugging for paparazzi shouting "ONE MORE! ONE MORE!" at her, photobloggers shooting pictures of everything in sight, and anxious SFIAAFF staff nervously looking down Castro Street to see if featured actor (and blogger) MC Hammer was going to make it to the theater before the stated start time of 7 p.m.

There were people dressed in Bruce Lee yellow jumpsuits, elegantly-attired people no doubt heading out for the gala after the screening, a man collecting autographs who asked us whether we'd heard if Jennifer Siebel would be attending the screening (answer: no), and a man desperate to get into the screening who kept asking us if we'd sell him our plus-one ticket (and nearly attacked someone trying to return their tickets to the box office.) We hope he got in!

After the jump: MC Hammer shows up a mere 10 minutes before showtime! We got pictures!

The infamous SFist Rita took time away from her remote cave lair and evil blogging minions to hook me up with an advance copy of , starring none other than SFist commenter herself, Jennifer

As requested, here is our (crudely) Photoshopped vision of some possible safety improvements at the now infamous intersection at Octavia and Market. Would making these changes help the cyclists? See you after the