Levi Leipheimer successfully defended his gold leader's jersey yesterday in Stage 6 of the 2007 Amgen Tour of California (TOC), but it was Team CSC that commanded everybody's attention. Refusing to concede a single pedal stroke to Leipheimer or his Discovery Channel team, CSC kept the stage hopping with steady pressure on the front from veteran scrappers like Bobby Julich and Stuey O'Grady. For their efforts, CSC locked up the overall team classification and propelled their TOC sprint man Juan Jose "JJ" Haedo to his second stage victory of the tour.

Brilliant teamwork like this from Discovery Channel helped their man Levi Leipheimer fend off attacks from CSC in Stage 6 and keep the overall race lead. Check out the CSC team catching a free ride at the end of the Blue Train. Photo from Mark Shimahara -- BikeZen.com.

The peloton barely had time to wipe that silly Santa Barbara grin off their collective face before getting peppered with attacks by the likes of Tom Zirbel (Priority Health), Shawn Milne (Health Net), Mauricio Alberto Ardila Cano (Rabbobank), and others less than 20 km into the race. These riders were hoping to catch the peloton napping and build a huge breakaway lead early, gambling that teams like CSC and Discovery Channel might concede the stage and let them go in favor of protecting their General Classification (GC) men.

Reports from the field indicated that Leipheimer was not pleased about the early breaks. It's hard to believe he was expecting everybody else to lay down for him, but maybe he read our story yesterday and figured the final two stages of the TOC were just a formality.

Despite his consternation, Levi apparently was relaxed enough to stop and take a whiz at the 20-km mark. Yes, it does happen, especially with all that hydrating that bicycle racers do. Make it quick Levi, anything more than a shake constitutes pleasure.

In fact, Discovery was perfectly content to let the early breakaways ebb and flow. After the first KOM line, taken by Ardila Cano, a large pack of KOM riders, including Christophe Laurent (Credit Agricole), Thomas Peterson (Slipstream), Jurgen Van de Walle (Quick Step-Innergetic), Adam Hansen (T-Mobile), and Mario Aerts (Predictor), broke off the front of the peloton and gapped up to Ardila Cano and Milne.

The field sprint finishes might get all the headlines, but for our money, the KOM competition is the heart and soul of any stage race. From the official Amgen Tour of California media guide, "For many cyclists, this jersey [KOM jersey] displays the badge of suffering through the most pain." Pain and suffering, now that's what we're talking about! 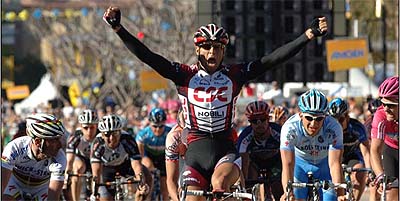 Fog City Journal is reporting that Matt Gonzalez has been in talks with a campaign manager, Nicole Derse, about running. We're all guessing it's for Mayor but who knows with Matt? We've heard