Apparently, Caltrans is gearing up to begin repair work on the disheveled Devil's Slide this week, but they're not offering any estimates as to when the road might once again be open to traffic. The official, public position is that the picturesque but perpetually rubbly stretch of Hwy 1 that links Pacifica to the coastal communities is "closed indefinitely." Hmm, that sounds like a long, long time.

But take heart Coastsiders, while dining in North Half Moon Bay on Saturday night, SFist learned through firsthand hearsay, relayed from a source that we were assured was "totally connected," that the latest insider estimate for the reopening of Devil's Slide is sometime around the Fourth of July. For coastal denizens about ready to lose their mother freakin' minds, this should offer some solace. We looked it up -- in the Thanks for Nothing category, two months does in fact beat boundless eternity. 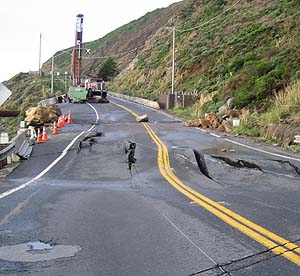 Traffic, already straining the limits of the coastside's underdeveloped infrastructure under normal conditions, has been at DEFCON 5 since the Slide was closed to traffic on the evening of Sunday, April 2. Because Hwy 92 is now the only viable route in or out of a host of coastal towns from Montara to Pescadero, it's not a pretty sight during commute hours. And that's just down in Half Moon Bay. For upper coastsiders in El Granada, Moss Beach, Princeton, and Montara, it's worse. On April 3, the first day that Devil's Slide was closed, it was taking commuters an hour to move between the two El Granada stoplights on Hwy 1, a distance of about half a mile. Many commuters are now getting up before 5:00 a.m. just to have a shot at making it to work in under two hours.

So we asked the cashier, as they rang up our Stoli and cardamom, OMFG WTF BBQ? Nobody knows for sure, but the Cala folks predicted that after the store closes for good on