It was poetry in motion out there in Stage 3 of the Amgen Tour of California, like a ragged stream of consciousness.

Hills, . . . hills-hills mark the stage most crucial to date, elevation profile like an EKG.

Under the merciless stare of giant windmills stoic, 17 riders breaking away BEWARE! the false summit of Patterson Pass, Van de Walle caught out as Peterson's debt to William Frischkorn grows. Over the top jersey stuffing newspapers, protection against the windy descent. 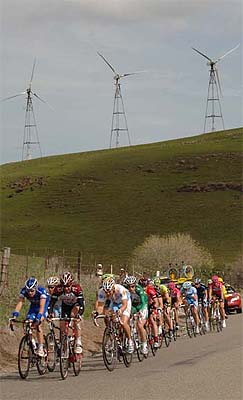 Three minutes, four minutes, five minutes, the lead grows. Where art thou Discovery? Jens Voight is far too strong for such ambivalent pacemaking, intentional or incapable, maybe a tactical error? Thus restless are the shoulders that wear the jersey golden.

On Calaveras turns the race smoothly like a Zipp, the Blue Train main line shredding remnants of the breakaway up the first slopes of the great beast, the destroyer of legs, the lactic acid bitch master, the Cat 1 crusher, hammer please don't hurt 'em -- Sierra Road.

Tony Cruz becomes Tommy Danielson becomes Georgie Hincapie becomes Ivan Basso and then, there is just Levi Leipheimer and his foes, and his demons gapping ahead, gunning for the race leaders.

He knows, this is his year this is his time this is his hill. It's in his eyes his legs his heart his leadership in damage done to the front end of the race.

And then they were one -- Levi and Jason McCartney the American Flyers working, pacing, stretching, stressing, Theo Eltink, Jakob Piil, Chris Horner, and Voight, controlling the race. 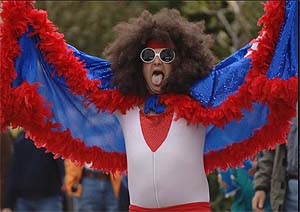 It was good to see Gavin Newsom out at the race today. Photo by Mark Shimahara, BikeZen.com.

Breaths come hard like pedal strokes at 15 degrees up a wall of pavement, cowbells, names in chalk and slobbery semiconsciousness, suffering is a badge of honor and, and, . . . is that Elvis?

Over the top and now it gets good. Ball-shriveling speeds on skinny, skinny tires thrill like Six Flags but the power of the peloton is never far, behind.

Five clicks out Leipheimer, Horner, and Voight joust for cycling supremacy, their motives mixed but their intentions pure.

Surreal like Vince Neil, Lance appears, riding shotgun in a team car, weird, and, obvious, he still wants it -- the attention.

The peloton rushes forward with power and purpose but there is no frenzied circuitry today, Jens wins without a struggle, masterful is his riding. 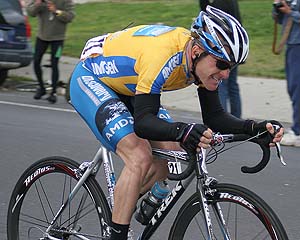 Levi puts down the hammer on the field. He wants it. Photo by Tom Clifton.

Sweet, sweet agony rewards LL with another day in the lead, such humility marks the man, "My guys deserve all the credit because they suffered."

And there's more in store for Stage 4.

We've seen some hideous examples of what can happen when a product attempts to combine several things into one. We've also seen some pretty good examples. Well, now there's a pretty stellar one:

Haight Ashbury Free Clinic, Inc.CEO John Eckstrom, Board Chair Eric Flowers, and Barbara Garcia of the S.F. Department of Public Health all addressed the crowd of over 100 on Mission Street